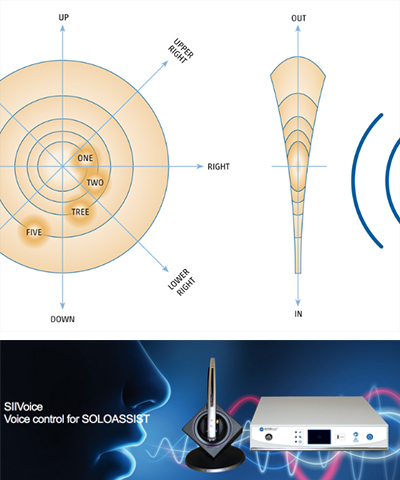 The SOLOASSIST Voice control SIIVoice is based on the industry leading, state of the art voice recognition engine. Together with an unique and intuitive set of commands, it allows a smooth and straight forward control over the surgeons view during endoscopic surgeries.

The command set of the SOLOASSIST Voice Control SIIVoice allows a precise control over the positioning of the endoscope during operation. Any command sequence is started with the hotword SOLO. After recognition of the hotword, commands are accepted for five seconds. If no command is recognized within this time SIIVoice returns to standby mode, waiting for the hotword again.

The four main directions (UP, DOWN, LEFT, RIGHT) as well as zooming (IN, OUT) can be combined with a distance modifier (ONE, TWO, THREE, FIVE, TEN) to enable an accurate control over the scope. In addition it is possible to use the keywords UPPER and LOWER to move diagonal. The command MOVE repeats the last movement.

Sometime it may be helpful to memorize a special endoscope position. With the SAVE and RESTORE keywords you can save up to three positions and restore this view when needed. With RETURN it is possible to undo the last movement.

With the SPEED keyword followed by ONE, TWO or THREE the speed of the movements of the SOLOASSIST can be adjusted to three preset speeds.